Since Apple launched their new iPhone 8 and iPhone X which support wireless charging for the first time in an Apple smartphone. There are questions that come up in everyone’s head – What is wireless charging? How does it work? Is it a big deal? And should I get one?

Let me put the answer in the first place – yes, wireless charging is a big deal and it’s the future of charging industry, and you should definitely get one, or at least you have to in a short time.

🔅 What is wireless charging and how does it work?

As the name suggests, you can guess that a wireless charger means that you don’t have to plug a cable into your smartphone to charge it. Just placing it on a special mat is enough. Wireless charging works by transferring energy from the charger to a receiver in the back of the smartphone. The charger uses an induction coil to create an alternating electromagnetic field, which the receiver coil in the phone converts back into electricity to fill the battery.

🔅 Is it faster than cable charging? Does it heat up?

Generally, wireless charging is a little bit slower than cable charging. However, Some are faster than others. They’re typically rated by wattage or by output amperage, based on the number of induction coil they use inside, for example, Aursen wireless charger uses two inductive coils and that allows it to charge smartphone much faster than others.

Smartphones typically heat up slightly when being charged via cable or wireless, the difference between them is very small in most cases, so there isn’t anything serious you really need to worry about.

🔅 What other devices support wireless charger except for the iPhone 8 and X? 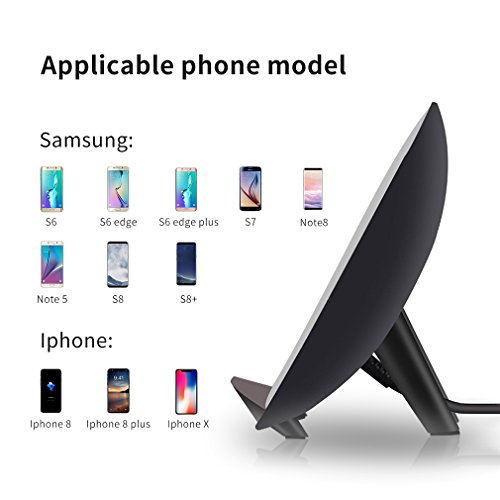 Wireless charging actually is not a new thing. It was first built into smartphones in 2009 and Samsung has supported wireless charging in its Galaxy S line since 2013’s S4 including Samsung Note8, S8+, S8, Note5, S7 edge, S7, S6 edge plus, and S6 edge.

🔅 What’re the disadvantages of wireless charging?

It also may not work well if you have a thick case on your phone, it dependents on the case material and the charger.

🔅 Do I need to buy an Apple or Samsung wireless charger for my smartphone?

The answer is simple no. There are so many wireless chargers on the market right now. They will all work on your smartphone as long as the charger matches the standard your smartphone supports. We highly recommend the  Aursen wireless charger for you which is safe, fast and beautiful. Besides that, you can save a lot of money compared with the Apple or Samsung products that have exactly the same function.